The focus on building resilience and enhanced sovereignty and security, made even more relevant by the pandemic, has led the current Australian government to invest $1B to fast-track the creation of a new Sovereign Guided Weapons Enterprise, intended to boost skilled jobs and help secure its sovereign defence capabilities.

In just six weeks of war, the Azeris successfully demonstrated how the deployment of lethal kamikaze drones has changed the face of 21st century warfare.

The history of military equipment acquisition in Canada includes some notable failures, but also some solid success stories. Can any of these lessons be applied effectively in the struggle to reverse the continuing decline in Canada’s defence procurement situation today?

The frigate HMCS Halifax is Canada’s latest naval contribution to Operation Reassurance in central and eastern Europe, a key element of NATO’s collective defence. The 15th RCN deployment since 2014, the frigate, which departed 1 January 2021, will serve as the flagship of the alliance’s Standing Maritime Group 1, which normally comprises four to six destroyers and frigates.

The Transfer of Ste. Anne’s Hospital

Ste. Anne’s Hospital, the last hospital wholly owned and operated by Veterans Affairs Canada on the West Island of Montreal, was transferred to the province of Québec with a monetary allowance for each Veteran living there. Services and care immediately declined as staff departed over pay cuts and reduced hours. This failure to care properly for our war Veterans also highlights the deficiencies in elder care across the country. Will the battle waged by a 96-year old Veteran result in changes before it’s too late?

HUDSON ON THE HILL

Canada continues to reiterate Canada’s “unwavering” commitment to the alliance, and has steadfastly answered calls for troops, equipment and materiel for a range of missions and exercises.

In this digital age, many threats to national security can be linked in some way to foreign-sponsored disinformation campaigns. This article calls upon the Government of Canada to take steps to establish on a national, strategic counter-disinformation plan that will mitigate any impact going forward.

FrontLine has gathered the key industry leaders in the defence and national security sectors. These are the project primes and specialized subcontractors that provide Top Quality solutions for the critical missions of the Canadian Armed Forces.

The Art of Camouflage, Stealth and Misdirection

The art of deception and misdirection, particularly in the cyber domain, is being widely practiced and diligently perfected by others. The dangers of social media deception are real, but are we countering?

The North Atlantic is a core part of the global defence challenge. Under the leadership of U.S. Vice-Admiral Lewis and his Canadian as Vice Commander, the "new" U.S. 2nd fleet is breaking the mold to create a reconfigurable force that can seamlessly integrate with other fleets. This includes forging strong relationships, utilizing new technologies, and building innovative concepts of operations.

Return to Normal? Not gonna happen.

There are so many areas where disruptive change is long, long overdue. And there is a solution, probably the only truly workable solution, to the deep-rooted problem of disrespect for all minorities – in government, in industry, and in the uniformed services.

When the Government awards contracts for defence-related projects, it is keen to see supply chain work done in Canada, as much as possible. In theory, this prioritizes economic investment within Canada as a quid pro quo for the large and lucrative defence contracts. But in practice... 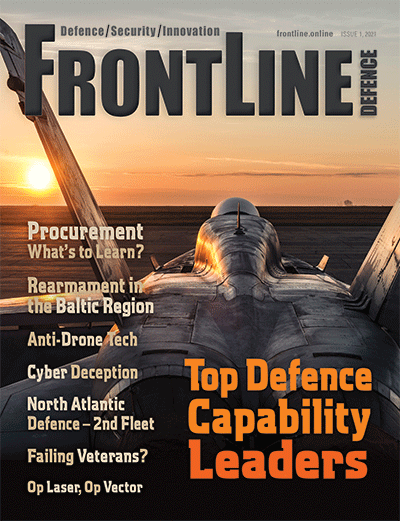 SPONSORED THIS MONTH BY: