1 Dec – CF-18 Hornet takes off from Mihail Kogalniceanu Air Base in Romania, to return to Canada during Operation Reassurance. (Photo: Cpl Eric Chaput)

With Putin bent on the destruction of Ukrainian culture, that brave nation is fighting to save itself – and in doing so they are fighting for all nations that believe in freedom, democracy and the rule of law. NATO has unified to provide the vital moral, financial and military support required for the Ukrainian people in their struggle. Let's look at the challenges of the tank requirement.

Boeing has been awarded a $2.3-billion U.S. Air Force contract for 15 KC-46 flying tankers for delivery by the end of August 2026. They would increase to 128 the contracted total, 68 of which are already have been delivered. Boeing also has export contracts for the aircraft, which is based on its civilian 767 platform.

One hundred years ago today, the Government of Canada authorized the organization of the Royal Canadian Navy Volunteer Reserve. Since then, the Naval Reserve has played a critical role in Canada’s safety and security. Today's modern Naval Reserve includes some 4,100 members across Canada.

A Public Service Alliance of Canada unit representing more than 10,400 federal workers who operate government buildings and services is asking for a 47 per cent increase in total compensation over three years. A Public Interest Commission tribunal says the proposal “would result in an increase to compensation far beyond what is reasonable.” 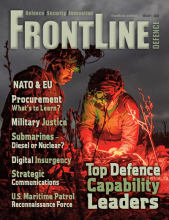 Save the Canadian Military Colleges

Action on the Arbour Report is likely to begin soon, LGen Michel Maisonneuve and Dr Danic Parenteau provide suggestions for consideration by the different committees engaged in these changes. Read on for clarification, and more details, pursuant to comments received after publishing (Oct 2022) their five general recommendations for any review of the Canadian Military Colleges.

This procurement has been politically turbulent for both Liberal and Conservative governments over the years, but Canada has finally announced it will begin taking deliveries of its first 16 F-35 Lightning II fighters in 2026 despite protesters who call for vulnerability in the name of peace.

24 January 2023   (AP)
UN Secretary General António Guterres wants an international specialized armed force deployed to Haiti as gang violence and human rights violations have reached a critical level. His call is part of a report January 23 by the UN Integrated Office in Haiti, which says killings surged by 35 per cent last year while kidnappings more than doubled. “There are also allegations that a significant number of national police . . . may be associated with gangs,” Guterres said.

24 January 2023   (BBC)
Several senior Ukrainian officials, including a Deputy Minister of Defence and President Volodymyr Zelenskyy’s deputy head of office, resigned or were dismissed today over widespread concerns about corruption. Officials have been banned from leaving the country except for authorized business.

24 January 2023   (Ottawa Citizen)
The Public Service Alliance of Canada announced today that strike votes by the 120,000 employees it represents in four bargaining units will begin in February. “We need to hold the line on fair wages that will prevent . . . falling further behind as the cost of living increases,” said PSAC National President Chris Aylward. The monetary goal is annual 4.5 per cent salary increases over three years; the government has offered 8.5 per cent compounded over four years

Finland wants “time out” in NATO

24 January 2023   (BBC)
The prospect of a Turkish veto on Sweden’s application for membership prompted Finnish Foreign Minister Pekka Haavisto to call for a “time out” until “dust has settled after the current situation.” Haavisto, who has suggested in the past that his country could go it alone on its NATO application but prefers simultaneous applications, was responding to Turkey’s concerns about Kurdish demonstrations in Sweden.

24 January 2023   (BBC)
A former Wagner Group paramilitary commander who claimed asylum in Norway earlier this month has been detained by police under the auspices of immigration law, apparently for his own safety. Andrey Medvedev, 26, crossed into Norway from Russia two weeks ago and his lawyer said January 23 that he was detained because “police concluded his situation was very dangerous.”

24 January 2023   (Defense News)
Nearly six years after announcing a joint maritime patrol aircraft project with Germany, France is looking at domestic options after Germany bought some Boeing P-8 Poseidons from the U.S. Navy as an interim solution. It has awarded 18-month contracts to Airbus Defence & Space and Dassault Aviation to examine potential replacements for its current decades-old MPA fleet.

24 January 2023   (BBC)
Turkish President Recep Tayyip Erdoğan said January 23 that he will not support NATO membership for Sweden. He was reacting to Kurdish expatriates’ protests in Sweden which included the burning of a Quran by a far-right politician from a Danish political party. “It is clear that those who caused such a disgrace in front of our country's embassy can no longer expect any benevolence from us regarding their application,” Erdoğan said.

No military discipline for Fortin

24 January 2023   (CBC)
Seven weeks after a Quebec civil court found Major-General Dany Fortin not guilty of sexual assault more than three decades ago, the Department of National Defence has effectively echoed that ruling, saying January 23 that there would be no administrative action. But Fortin said his professional situation remains unresolved and he is continuing with an official complaint about how Military Police handled his case.

23 January 2023   (Stars & Stripes)
Micheline Pollock, a former Canadian Armed Forces reservist who pled guilty to conspiracy to defraud the U.S. Army and Navy in connection with her Dubai-headquartered company’s construction projects in Africa, has been sentenced to time served and ordered to pay nearly $7.2 million in restitution. Arrested in Tbilisi, Georgia, in September 2020, she was extradited almost immediately and, after her grand jury indictment, was held pending trial.

23 January 2023   (EuroNews)
President Recep Tayyip Erdoğan has announced that Turkey's next parliamentary and presidential elections are now set for May 14, a month earlier than previously flagged. Erdogan has been in office since 2003 as prime minister and then as president. If no clear winner emerges from the first ballot, a second round of voting would be held two weeks later.

23 January 2023   (Reuters)
Andriy Yermak, chief of staff to Ukrainian President Volodymyr Zelenskyy, said today that his country needs “several hundred” main battle tanks to mount an effective counteroffensive against Russia and reclaim Crimea. “Our goal is the borders of 1991 and punishing the enemy, who will pay for their crimes,” he said.